If you have lots of people that potentially answer any calls to one of your phone numbers, you can create a hunt group. Hunt groups are relatively simple, as you just create the group, add members and state when people are part of the group (i.e. when their phone will ring).

However, sometimes you might find that your hunt group grows to be quite complex, with members added multiple times to take into account different working times on different days. This can make administration of the hunt group complex, which is why we've introduced additional functionality to make managing the behaviour of the group simpler.

This guide assumes that you have basic knowledge of how our hunt group functionality works.

A basic hunt group set usually involves creating the group, configuring the expected behaviour of the group (music on hold, voicemail settings etc.) and adding extensions as members of the group.

Once you have a lot of members, it might make sense to start putting some of them within their own hunt groups to make management of everything slightly easier. You can add a hunt group into a hunt group, which might sound complicated but as long as you carefully check the settings it will make managing your hunt group a lot easier.

What does the terminate call flow setting do?

You may see a tickbox next to some members of your hunt group called Terminate call flow. You can use this if you want an incoming call to be taken over by that hunt group. This means that the call will be intruded by the new hunt group, and follow any rules you set up on the second group.

Let's pretend that you want to set up a hunt group for your sales team. At first it's quite simple as your five staff all work 9am to 5pm Monday to Friday. If no-one answers you want to route the call to your main switchboard. In the unlikely event that no-one on the switchboard answers either, you want calls to go to your paid for out of hours service, which you have set up an alias for. This alias also answers all calls outside of office hours.

This setup is relatively simple, and just looks like this: 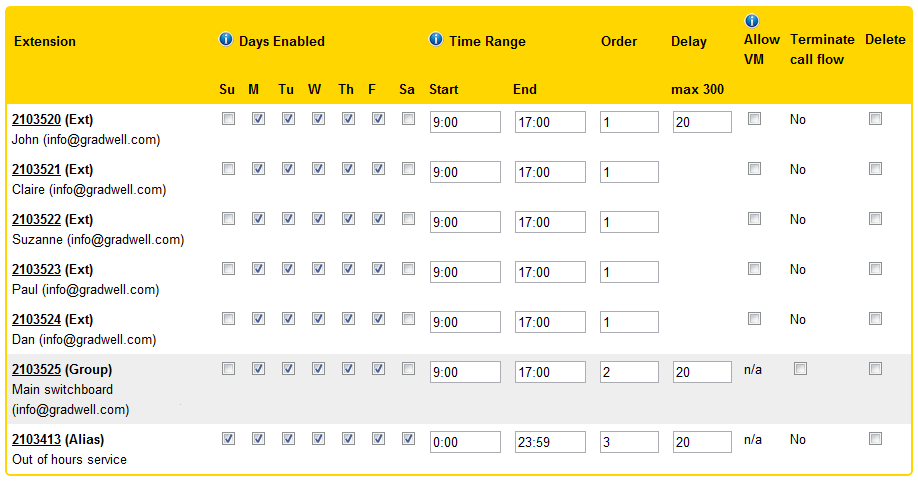 Suddenly your relatively simple hunt group is a mess. 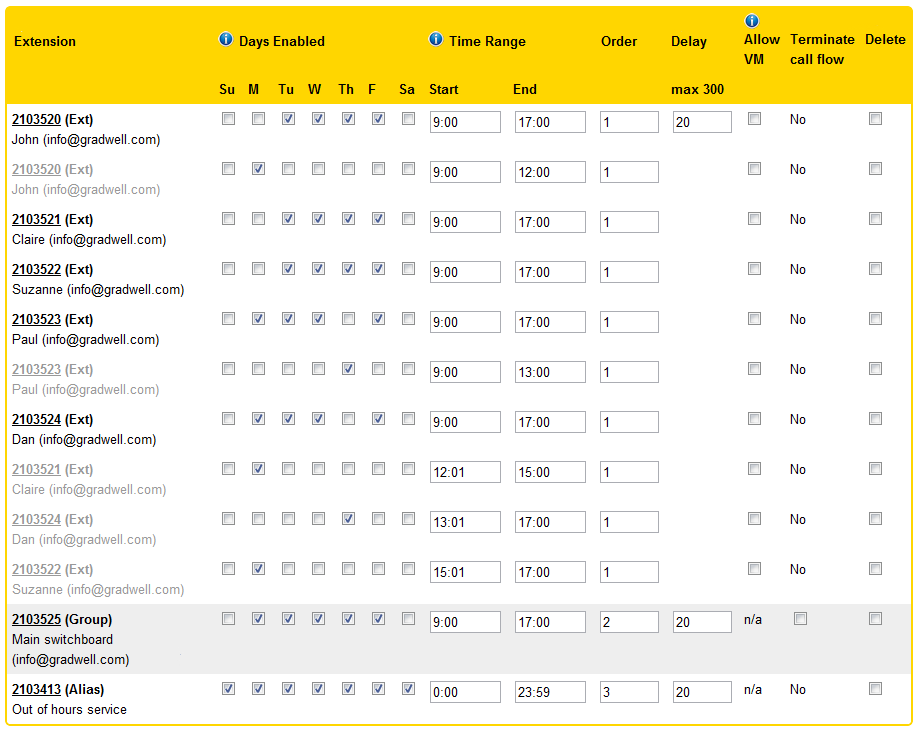 So how do we solve it? The simplest way is to create separate hunt groups for Monday and Thusday, and add the staff we need to make special arrangements for on those days to them. For example:

This is Monday's hunt group, and as you can see we've added John, Claire and Suzanne, as well as their specific working times. We don't need to worry about the days enabled, as the main hunt group will control this.

As for our main group, as you can see it's now a lot cleaner. It's a Monday, so we can see that Paul, Dan and the Monday group are active and will take calls. If a call comes in, the system will ring all the active members of both the main group AND any active members of the sub-group. If the call isn't answered, it will be picked up by the switchboard.

Furthermore, if we need to make changes to the Monday shift pattern, we can just edit the Monday hunt group. 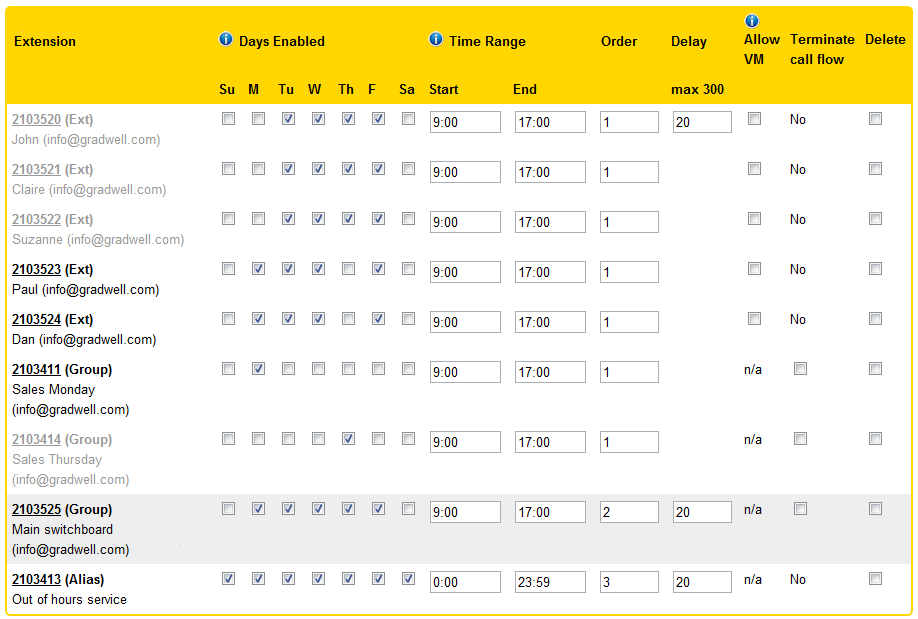 Now let's assume that we've decided that because we have to pay for every call made to the out of hours service, we only want to use them when the office is shut. Because the hours of this are irregular (all day weekends, but before 9am and after 5pm during the week) we could add the alias three times to take this into account. However, once again things are getting complicated. 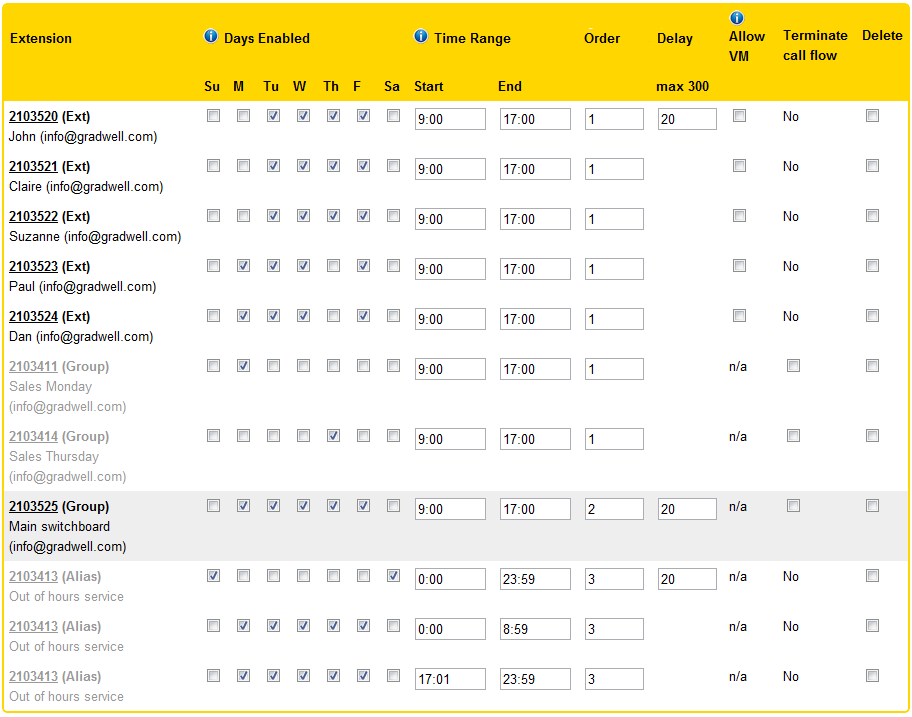 A much simpler solution is to use the Terminate call flow option. You can use this if you have a hunt group that you want to pass the call off to. This means that you will divert the call into this hunt group, and as far as the first hunt group is concerned, you have terminated the call and it will not control it any further. 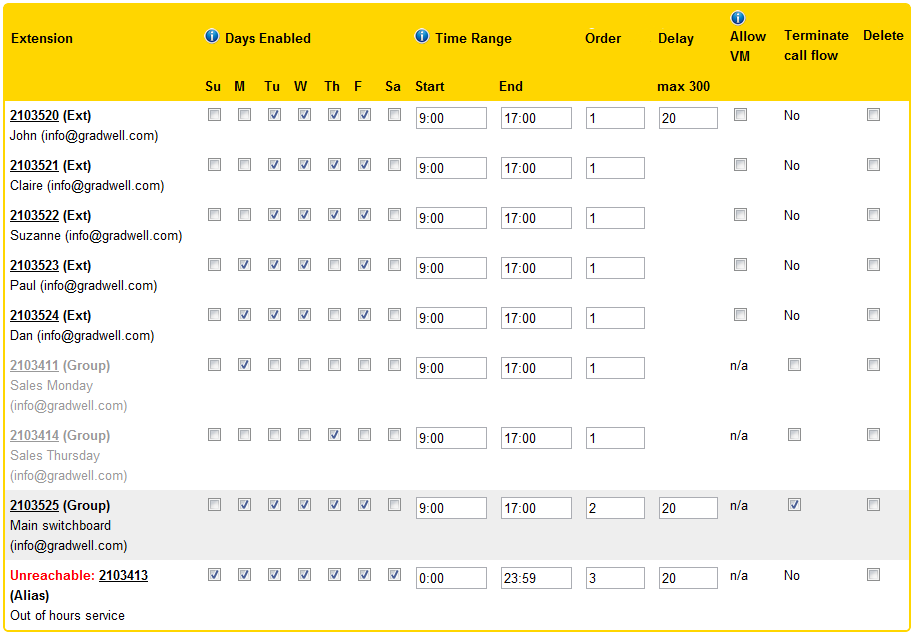 As you can see, during office hours our alias now has the text unreachable next to it. The system is telling you that at the present day and time a call into this hunt group would not be passed to this alias, despite it being active under the date and time rules you've set. This is because the main switchboard group will take on the call.

If, however, we were to look at the hunt group on a Saturday, it would look like this: 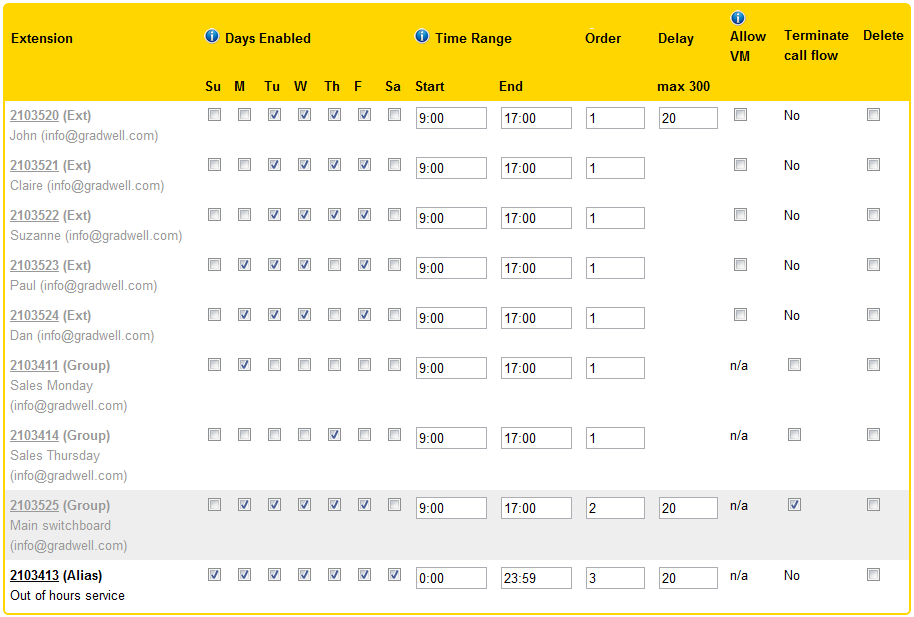 So hopefully you can see how utilising both adding extra hunt groups and using the terminate call flow function can simplify the management of your complex hunt group.

Can I still play hold music if I have hunt groups within my main group?

Yes, simply configure your hold music in the main hunt group. Do not configure hold music for any of the groups that are members of this group (if you do they will take over the call when the call reaches them).

Why does terminate call flow say yes instead of being a tick box?

If there is no tickbox for terminate call flow, and it instead says 'yes', it means that the destination will take over the call. There can be a number of reasons for this. For example. if it is a voice menu the recorded message will be played and prompt the user to enter a key press. In this case, there is no way for the call to be returned to the hunt group as the voice menu has taken over the call.

If it is a hunt group with a message before ringing or hold music set it will also set this field to yes. This is because playing a message or hold music will cause that hunt group to 'take over' the call. If you do not want this to happen turn the hold music and/or message off in that group.

Why does an extension say 'unreachable'?

If a member of a hunt group has Terminate call flow ticked it will take over the call when it becomes involved in the hunt. Any other members of the group, even if they 'would' be active due to date and time settings, will not receive the call.

Our system detects this and states that at the present time the following members would be unreachable. If the member of the group that has Terminate call flow enabled is not active due to time and day settings the members after it will be involved in the hunt and the text will not appear.

I have an alias as a member of the group which goes to a mobile phone. Why is the call not returning to the hunt group if the mobile isn't answered?

The only solutions to this problem is to either reduce the ring delay on the alias until the mobile isn't tried long enough for the voicemail service to initiate, or to turn off voicemail on the mobile phone completely.

You should also be aware that even after tweaking these settings might not make a difference if the mobile is off or out of signal. In these cases the call may be terminated on the mobile device regardless, and not returned to the hunt group.